When communities confront the risks associated with climate change, they have to find ways to reconcile differing perceptions of risk and very different attitudes toward uncertainty. They also need to clarify trade offs and the best ways forward despite a high degree of complexity. The combination of risk, uncertainty and complexity pose substantial challenges to decision-makers: how should future risk and uncertainty be taken into account in decisions that have to be made today? For example, should coastal cities allow new high-rise development along the shore when possible sea level rise and increasing storm intensity may well damage such structures on a regular basis? How can decision making processes help build consensus on the best ways forward? Collaborative scenario planning is a tool that can help. It enables residents and officials to test proposed actions against a range of possible futures so that whatever decision is made will yield “no regrets” later on. In this way, scenario planning can help decision makers incorporate future risk and substantial uncertainty – as well as a range of interests and perceptions regarding climate change – into decisions that have to be made today.

Through our long-standing partnership with the Lincoln Institute of Land Policy, CBI has been exploring collaborative approaches to managing risk and uncertainty in land use decision-making. Most recently, in March 2012 we partnered with the Sonoran Institute and Stephen Aldrich, president of Bio Economic Research Associates (bio-era) and a longtime scenario planning practitioner, to offer a workshop on collaborative scenario planning. The 1.5-day workshop was held in Phoenix, and was tailored to address drivers of change and uncertainty in the southwestern United States, with an emphasis on climate change risks.

At the workshop, Aldrich outlined a scenario planning method that involves convening a multi-stakeholder group to jointly develop a set of plausible scenarios for the future of a place or problem over a given time horizon. Policy options can then be measured against these scenarios using a set of criteria that are also generated jointly (e.g. cost, efficacy, adaptability). This approach to scenario planning emphasizes not simply an analysis of alternative futures, but an effort to imagine a range of possibilities based on what is known today, what is most uncertain, and what are considered the most important drivers of change in the system being considered. Two key distinguishing features of this approach are the involvement of stakeholders throughout the process and the assumption that all of the scenarios should be regarded as equally probable. Other forecasting methods try to attach specific probabilities to each alternative future; scenario planning, for a variety of reasons, doesn’t do that.

Throughout the Phoenix workshop we reinforced these concepts and the steps involved using an interactive exercise based on the real threats that climate change is expected to pose for water in the southwestern United States. The exercise, called “Planning in Robert County,” presented a fictional Sun Corridor county facing pressure to increase development even as its water supply may decrease due to climate change. The participants used this case to identify the most important characteristics and considerations for the county, and then translated them into key elements of future scenarios by categorizing them as “pre-determined elements,” “major uncertainties,” or “driving forces.”

In the final exercise, participants were assigned one of seven roles that represented common stakeholder groups and interests in the Southwest (e.g. Robert County Board of Commissioners, Robert County Agricultural Association, Andres River Environmental Organization, etc.). They also received a scenario framework (figure 1) based on two major uncertainties: would Robert County return to rapid economic growth (i.e. Rate of Growth); and would the decreases in water supply due to climate change predicted in the fictional “NRL Climate Change Report” prove correct (i.e. Water Supply). With help from a facilitator, the participants were asked to evaluate a set of water policies using this scenario framework, while also taking into account the interests and perceptions provided in their role descriptions. Many participants were asked to play a role that had very different interests and perceptions of climate change from their own personal or professional situation.

Participants, who came from state and local agencies, academia, and the private and NGO sectors, reported that the workshop helped them understand both how collaborative scenario planning works and how it might be useful in their professional contexts. Engaging in a step-by-step simulation of a scenario planning process helped them gain a clearer understanding of what such a process is like, and what the benefits and challenges are of working with multiple stakeholders. Several participants asked for more information about the consensus building aspect of process, such as convening the process at the start and conducting an assessment to understand which stakeholders to involve and what issues to address. 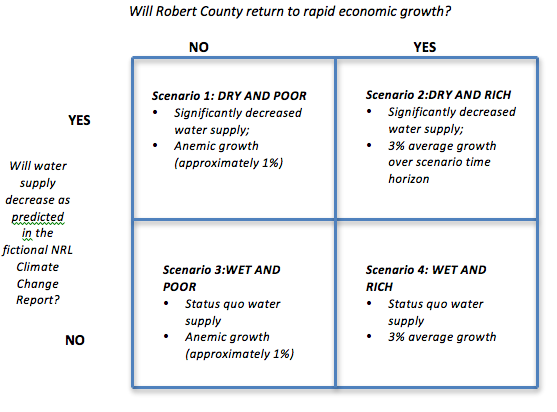 This workshop built on our previous work on managing risk and uncertainty in resource management decisions.  Among the most important lessons we have learned are:

1. Develop a Common Vocabulary at the Outset

For some people scenario planning suggests a way of working toward a predetermined or “official” future. By contrast, the methodology that Aldrich teaches emphasizes the formulation of a portfolio of plausible futures that are taken to be equally probable, and then testing proposed policies and/or strategies against each of these options to discover which policies will perform well regardless of what the future holds.
Aldrich emphasizes that this method is best for dealing with “wicked” problems, that is, situations that are characterized by high degrees of both uncertainty and complexity. Likewise, he distinguishes expert scenario planning processes from multi-stakeholder approaches. We argue that involving a diverse set of stakeholders in developing multiple scenarios (and testing policies against them) will ensure that local knowledge is tapped, that diverse points of view are taken into account, and ultimately that decisions taken will be seen as more legitimate and thus more easily implemented.

Most people don’t spend their days thinking about highly complex and uncertain problems in terms of multiple possible futures. Rather, they make up their mind quickly about what they believe (even if their decisions are based on very little information or expert advice). Responding to the risks associated with climate change requires a different way of thinking and a certain comfort level with the unknown. Taking account of equally plausible futures is new for many people, whether in a workshop or an actual scenario planning process.

This dynamic was evident at our workshop in Phoenix, for example, when participants in the Robert County exercise were asked to think about how specific water policies—such as transferring existing surface water rights or increasing water prices—might perform in a scenario that was essentially the status quo versus a scenario in which water supplies were significantly decreased while economic growth continued apace. Participants found it difficult to analyze how one policy would perform in multiple futures, and to separate that analysis from the interests and priorities of the role they were asked to play. The person whose role required vehement opposition to the idea of paying more for water, for instance, had a hard time recognizing that this policy might work very well in a situations where there is scarce water and high growth.

To help manage this dynamic, it is important to name the mental shift required to handle complexity and uncertainty, recognizing that it is not an easy one to make and giving people plenty of time to get used to it. For the purposes of the workshop we found it helpful to regard the exercise of helping the participants assess one policy in light of four equally plausible futures as an important goal.

Making any workshop interactive is usually helpful, both pedagogically and to keep the audience engaged. Interactivity is especially important for teaching new ways of handling risk, uncertainty, and complexity. Many people work better when concepts and theory can be tied directly to real decisions like those they are facing in their own lives. Giving people a concrete example or exercise that is familiar, but does not directly reflect their real-life situation, can help bring concepts “down to earth” while leaving room to experiment with new ideas and points of view (Plumb, Fierman, and Schenk 2011).

Another reason for “interactive doing,” as we came to call it in Phoenix, is to help people see both the challenges and the value of going through a process such as collaborative scenario planning. For example, it may be clear in principle that using major uncertainties or drivers to structure future scenarios makes sense, but when it is time to select and combine those elements, decision making becomes even more difficult. When we asked participants to identify the major uncertainties for Robert County, a debate unfolded: Should climate change be treated as a major uncertainty, or is it a predetermined element? Is economic growth a driving force, or is it a major uncertainty? Participants commented afterward that they were surprised at the debate, but found it immensely valuable to see how a group of people could draw such different conclusions based on the same three-page hypothetical story.

Building in time to practice the concepts, then, is critical to reinforcing new ideas, linking them to real problems, and illustrating the value of taking account of different interests and perceptions at the same time. In the context of workshops, we recommend fictionalized but realistic interactive exercises such as Planning in Robert County, which can provide relevant information, reinforce concepts, and encourage participants to take on perspectives to which they may be unaccustomed.

4. Learn How to Utilize Consensus Building in Situations Involving Risk, Uncertainty, and Complexity

Consensus building techniques have an important part to play in community decision-making, especially when long-term risks are involved. Engaging representatives of affected stakeholder groups in a meaningful way helps ensure that a range of perspectives and interests are expressed, that local knowledge is utilized, and that decisions that are ultimately reached are legitimate and credible. Moreover, stakeholder groups should probably learn how to be involved in implementing climate change adaptation policies, since collaborative adaptive management is likely going to be necessary (Islam and Susskind 2012).

Consensus building requires selecting representatives of relevant stakeholder groups. Stakeholder assessment tools can be used to identify appropriate participants and to involve them in scoping what will be talked about and which expert advisors should be tapped. A facilitator or team of facilitators can be used to manage the collaborative process. “Neutral” process managers can help keep the conversation on point and produce discussion summaries that everyone thinks are fair. Facilitators can also help groups think through how implementation ought to proceed.

Overall, the inclusion of multiple stakeholders can help ensure that scenario planning is used as productively as possible to address climate change risks. In many cases, it is not enough for experts or decision makers to forecast the future on their own. Rather, the most robust decisions are those informed by the stakeholders who have learned how to work with uncertainty.