Chile, a world leader in renewable energy, is updating its long-term energy policy with a process that gives hope about the transformational power of participatory dialogue processes. An Advisory Committee in charge of preparing consensus recommendations published its report this month, culminating 8 months of work informed by workshops and activities throughout the country. Excited with what they achieved, the committee decided to publish a letter in Chile’s El Mercurio newspaper this Sunday to "give testimony" and concrete signs about the power of "constructive dialogue."

"Perhaps not everyone knows that energy policy in Chile has been built for years from open and participatory processes, with various levels of work, decentralized, regionally and virtually," the members of the Committee wrote in their letter. "Perhaps they also do not know that we have managed to sustain this way of working, which considers energy policy as a matter of State, a permanent interest for the country that transcends changes of government and even political ideology."

One of the audiences of the letter was the 155 people in charge of writing Chile’s new constitution, selected the day before in a national election. Chile faces a challenge and a great opportunity to write a new founding document, and the lessons of energy policy are vital, showing the value of constructive dialogue build agreement around public policies despite our differences. Chile leads the world with its energy transformation, thanks in part to its ability to galvanize the entire country around bold goals built out of dialogue and consensus.

CBI facilitated this energy policy dialogue, as we did 6 years ago under a different administration. You can read the committee's final report here and the letter below. A short video about CBI’s role 6 years ago in building consensus around Chile’s national energy policy can be seen here. 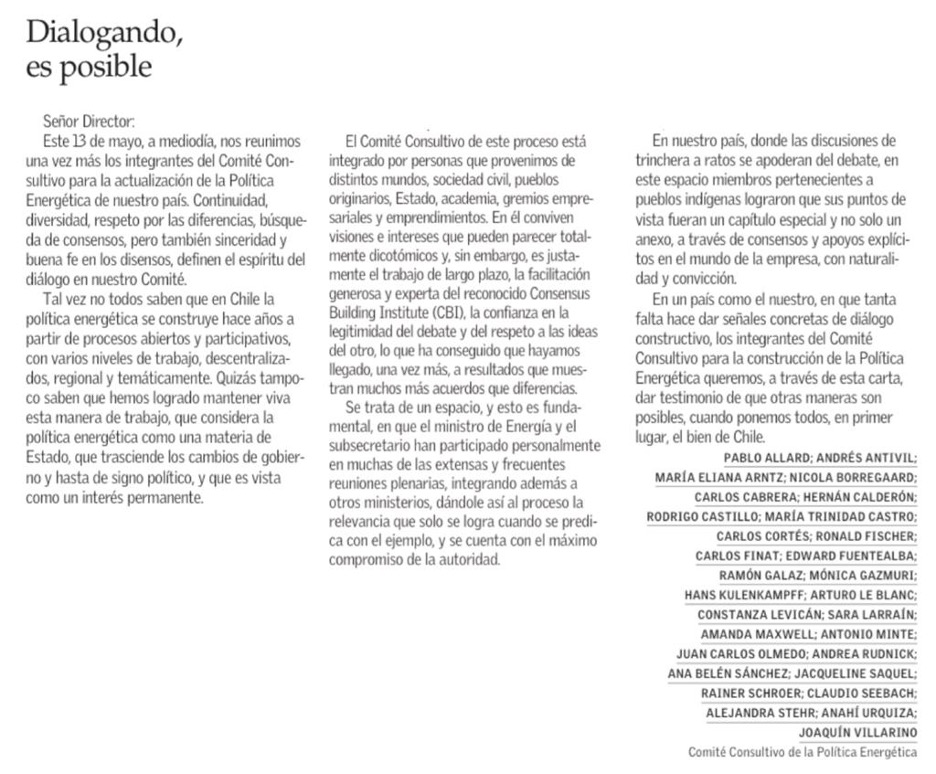